Ohh that Tulisa. She’s a right cheeky one. Doing her arm salute thing without a thought given to Ofcom. Aside from her daring act of rebellion, this week was hard because the acts had to sing two whole songs. Well, not two songs really. More like one and a half – the songs are highly edited after all.

Little Mix opened the guilty pleasures-themed show with a “Baby” mash up. We had Beiber AND Diana Ross. It was more like their performances of a few weeks ago in that the vocals were a bit patchy at the start but they got better towards the end. Somewhere in the band there’s a weak link on the fast numbers. I’m going to make it my duty to work out which one it is. 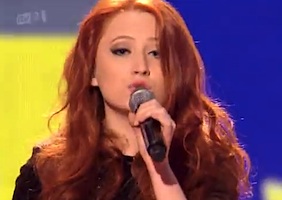 Oooh, I feel a bit sick

Not entirely sure what Janet was doing with MmmBop. I kinda presumed the acts would like and KNOW the guilty pleasure song they chose. Forgetting the words was not ideal. The only way she could have saved that performance was if she really had thrown up on stage. Her hair looked nice though and some bits of the song were okay.

I have no idea why Misha B was dressed as a Yardie but I do know untold girls will be trying to rock the boobs-out sportswear look at next year’s Notting Hill Carnival. I think Girls Just Wanna Have Fun was a good song choice for her. She looked happy and it bizarrely suited her voice. I thought it might be a bit of a mess to be honest.

Marcus has got weak yo’. It’s like his voice only sounds good if he’s singing at full pelt and even then it’s sometimes a bit shaky. His first performance was good as he obviously likes all the running around and dancing and this time he did it without the weird Little Richard vibe.

Ohh hark at Amelia Lily – her hair isn’t pink any more. She seems to have replaced her hair dying time with fake tanning. Girl is orange. To her credit she did a proper guilty pleasure song and she did it fairly well. She’s good at belting out a note, but I don’t know how strong her voice is. It sounds a bit strained at times.

The second theme of the day was heroes. Yeah, they had TWO themes in one show. We all know how well they stick to themes usually!

Beautiful, in every single way

Little Mix hit the stage again with Beautiful. You know why, right? Because the Furby one gets bullied for being fat and she gets forced to wear trousers with reflective stripes on. That last bit may or may not be part of her sadness.  She took the opening bars of this performance just in case we were confused as to why they were singing it. For me this was their best performance. They all sounded really good and seemed to properly come together as a group.

Like, OMG Janet is so edgy her musical heroes are the Red Hot Chilli Peppers. This performance of hers encapsulated exactly why she gets on my wick. Seriously, the stop-starty singing kills me. We know she has a decent voice and it isn’t super weak so why all the breathy, scratchy crap? Oh, and what the crack was the staging about? Why did we have to see weird demonic pictures of her face in the background? It grimed me out. I thought it was Halloween week again.

For Misha’s second song it was just her, some mirrors and her voice. She really is a talent and, even thought she won’t win, I’m glad she’s on the show as I have no idea how she’d get signed otherwise. She needs to do a J Hud. As in, get kicked off and then become a super amazing famous type. Her performance of Killing Me Softly started out a bit average but by the end was a right treat for the ears.

A man of many wishes

Marcus set himself quite the challenge with his song choice. At first I was like, is this dude serious? – He is sounding wack. But then, true to form, he pulled it back with the big belty bit at the end. Tulisa acted like a dick again and told us that Marcus has some issues he doesn’t really talk about. If he doesn’t want to talk about them, then why is she?

Amelia Lily said her musical hero was Kelly Clarkson and immediately made most of us in the audience feel about 100 years old. She went with Since You’ve Been Gone, which is a big old song. This girl has faith in her vocal. I think she was a bit shouty to be honest. Kelly Clarkson is the high priestess of shouty singing, but currently Amelia is just getting the shouting bit right.

I’m not sure what next week’s theme is. My mind is all a-flutter with talk of the winners single being Cannonball by Damian Rice. Simon Cowell loves getting the public all ragey. I’m guessing that the indie* kids are going to be all up in arms about one of “their” songs being covered and gain a pretty lack lustre season of The X Factor lots of lovely publicity. Bravo Simon, bravo.

*I say Indie , I mean people who like that guitar/singer/songwriter stuff. What are they called? Boring?

Comments Off on The X Factor: Guilty pleasures and musical heroes