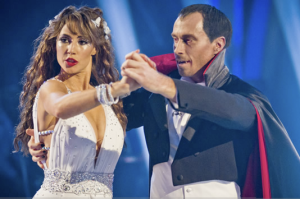 It was Halloween Special on Strictly. I must confess I’m of an age when I’m not sure Halloween, as an event, merits a special of anything(apart from Psychoville). Far too much fuss made of it these days. When I was a kid, you might have a bit of enforced apple bobbing and a pumpkin in the window, but that was it. Now, we have a whole Saturday night’s light entertainment on both channels devoted to it.

In keeping with the theme, the show starts with a mildly embarrassing Addams family group dance, before a terrifying wizened member of the living dead appears – oh, hang on – it was Brucie, making the traditional weekly grab for Tess’s upper thigh.

Like Velocity Girl, in last week’s review, I must confess to getting a bit fed up with all the padding in Strictly at the moment. The show is plenty long enough without all the quirky videos. It’s fine to see a bit of training, but all this; “Alex was told by the judges last week that she needed to be sexier, so I decided to take her to a live sex show” is wearing a bit thin. We had Chelsee and Pasha visiting a school, Alex and James abseiling (yeah, yeah – it wasn’t really a sex show, but you get my drift), Harry and Aliona poncing about in the London Dungeon, and a horrific dream sequence for Jason featuring Ann Widdecombe of which the least said about, the better. In the words of Len, please stop all this messing about. A bit of training, and just do the bloody dance. For the last couple of weeks, we’ve recorded Strictly, which means you can whizz through all the extraneous nonsense and save a good half hour. I’d recommend it.

Anyway, enough of this. What about the dances?:

Russell and Flavia tackled the samba. As I said in an earlier post, Flavia is my absolute favourite. The Argentine tango she and Vincent performed on last weeks results show was extraordinary. This particular dance wasn’t Russell’s best effort, but he’s very watchable and entertaining, plus he’d torn a meniscus in his knee, so we’ll forgive him. Once again, Mrs OMITS spotted his testicles.  I wasn’t looking, so shan’t comment further. If Russell has to drop out following his surgery, I’m very happy to take his place. Flavia only has to return my calls.

Chelsee and Pasha took on the tango. A clever move to use dry ice to hide your footwork. Covers a multitude of sins. It was all a bit fast for my liking, but a good effort. Chelsee seems quite vulnerable and insecure, and got upset when her dress malfunctioned. I have to say that I studied the footage extensively, but couldn’t see the tiniest hint of nip, so she needn’t have worried. The judges were all very reassuring and sweet, and I suspect bumped up her score out of sympathy. Nice move, Chelsee.

Speaking of judges, what was Alesha wearing? It looked like she has a horse blanket strapped to her front. Bizarre.

Audley and Natalie threw themselves into a jive. I’ve got to be honest, I was dishing up dinner at this stage, and when I heard the lacklustre comments from the judges, couldn’t be bothered to rewind and check it out. Nice bloke though.

Alex and James had a stab at the paso doble. Again, good effort. Mrs OMITS thinks Alex a bit ‘asexual’. Is she? She looks pretty good to me, but I guess it’s not all about the look.  James, in his vampire makeup, looked a bit like Rigsby, chasing a demure Miss Jones around the room.

Holly and Artem did what they purported to be an American Smooth. Now I realise a few ballroom lessons a while back with Heather and Mike at Allsaints Church Hall don’t make me an expert as such, but going all ‘Black Swan’ to a touch of Tchaikovsky didn’t look much like an American Smooth to me. Not very Fred and Ginger at all. Artem looked as if he’d fallen in a large bucket of flour. He did an impressive lift though. You have to be strong to lift Holly – “she’s quite a big lass” pointed out Mrs OMITS. 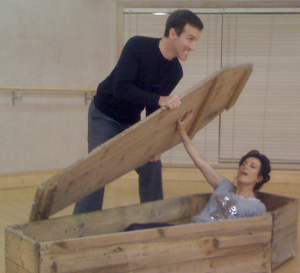 Nail it down and return to Svender

Nancy and Anton took on the rumba, the dance of lurve. Not much love for Nancy though from the judges. Alesha pointed out that her legs were too far apart for most of the routine. They were a bit, but I’m starting to feel a bit sorry for Nancy. It was interesting, incidentally, to see her on Graham Norton last night, clearing up the mystery of what she actually does for a living. I say, ‘clearing up the mystery’; I’m not sure that’s actually what she did, but it was quite entertaining, whatever it is she’s supposed to do. The judges gave her a total of 14. Ouch.

Harry and Aliona’s tango was nicely dramatic but seemed to lack a bit of dance content. They weren’t in hold that much which Len and Craig picked up on. I didn’t like the neck breaking bit at the end – it must come from being an osteopath. Aliona needs to seriously listen to the judges. Harry’s a good dancer, but needs to, er, dance a bit more. Just saying.

Robbie and Ola’s paso doble followed the pattern of many paso dobles – ie, lots of cape waving and strutting, but when in hold it all looked a bit like they’re just walking about. It’s a weird dance, the paso doble. Not the sort of thing you’d ever pull out at a family wedding. Robbie did an impressive (if you like that sort of thing) jump on to the judge’s table at the end, which could have gone very wrong. I almost wish it had. Does that make me a bad person?

Craig seemed very positive with his comments all night. Mind you, having said Robbie and Ola’s dance was, subject to some criticisms, “am-a-zing’, he only gave it 4.

Anita and Robin’s tango had lots of hold work to keep Len happy, but I didn’t like her squatting on a supine Robin half way through. There’s no need for that sort of thing. It’s enough to make Brian May’s hair curl.

Lulu and Brendan’s paso doble was alright I suppose. I was getting a bit bored by this stage. Lulu flew in a la Ann Widdecombe, which always seems a desperate measure to me to jazz up a dodgy dance. 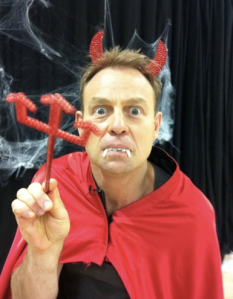 A demon on the dance floor

Jason and Kristina were last on (again) with the quickstep and did a fine job of it with proper dancing and not too much messing about. They ended up top of the leader board again with a 37. I couldn’t quite work out Jason’s make up – a couple of green splodges under his eyes? Tess asked if he’d keep it on to go trick or treating with his kids. Why would he do that?

So, normal service is resumed going into the results show tomorrow – Jason at the top of the board and Nancy at the bottom. My money’s on Nancy to go. Or Audley. One or the other.

Meanwhile, I’m just waiting for that call from Flavia…….

Posted by Our Man in The South