The Apprentice 702: Who buys this cr-app?

As Qwerty Solo was off out galavanting and/or gadding about last night (she didn’t specify which), I was left to play Velocity Skywalker in her absence following her sterling First Night work here.

So, what did The Best Salespeople Ever to Honour The Humble Universe By Letting Their Glorious Feet Tread Upon It, which handily abbreviates to TBSETHTHUBLTGFTUI, come up with this time?

They had to do it without Exploding Edward the Angry Accountant, who bade us farewell in the previous instalment, presumably to go on to greater things in the medical profession or similar (“LOOK, I DON’T CARE if you’re haemorrhaging or WHATEVER, roll with the punches and SQUEEZE the BALLS out them ORANGES FASTER!”).

So, how did the remaining TBSETHTHUBLTGFTUI (see, catchy, eh?) do? I’ll answer this question with another – how many words are there in the English language for “bad”? Well, all of those. Possibly even more than that.

"I told you to only switch the blaaahdy computer on"

First and foremost, my thanks go to the programme makers by editing the swooshy music sound effects over the pictures so that SirAlun/LordShugah/EmperorAmstradAlmighty/whatever appeared to have morphed into a Tyrannosaurus Rex. Yo, Al! Join this band, they’d love to have you, I’m sure! AllyBaby then showed admirable range by resembling a wobbly-headed Thunderbirds puppet channelling Ray Winstone in the obligatory “listen up, you blaaahdy shlags!” style introduction video. Incidentally, this episode’s blaaahdy count = 0. Boo.

This episode’s Herculean, humanity-saving task was designing mobile phone apps for a global market. This was greeted by:

a)      Thomas The Inventor Engine (whom I rather like- solidarity for glasses wearers and all that) in a suit at 5am. To be fair, he had probably been up all night in it designing chocolate-coated teapots or similar;

b)      Much high-pitched squealing and nightwear-clad excitement (which was all rather Channel 5 for my tastes), apart from;

c)      Some groggy-looking girl in what appeared to be a zebra-print dressing gown. Given the CVs of the candidates generally, maybe her previous claim to fame was running a market stall with Robert Mugabe or something; and

d)      Lots of app-based puns that were by and large app-alling (oh shut up, it’s still better than Vincent the Musketeer’s tumbleweed-inducing “app-le” gag). 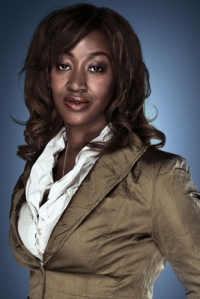 The Team Venture girls were lead by the Imperious Edna, the only one daft  brave enough to volunteer. “We’re all behind you!” dripped some saccharine girl. Yes, but with a knife, if Untrained Melody (even more ANNOYING than last time. I know!) has anything to do with it.

The Team Logic boys, on the other hand, all wanted a piece of the app-tion (look, I’ll get help when I’m ready). Eventually,Leonthe Orlando Bloom lookalike of juicer-trashing fame took charge, in the sense that he said “let’s do this!”, wrote on a flipchart and then went “erm” a lot.

As for the apps themselves, they were certainly “innovative”, in that they seemed to take “back of a beermat thinking” to new heights. Big-eared Glenn was the “brains” (all things are relative) behind some borderline-xenophobic app taking the piss out of regional accents. The name “Slangatang” was apt, since you’d have to be a monkey to ever think it was fit for anything other than landfill. However, it spoke volumes that this still seemed like a great idea compared to the girls, who after a great deal of faffing and Edna telling Little Susie to shut up (frankly, I and seemingly everybody else in that room could have kissed her for doing that) came up with something called “AmpiApp” that shrieked random and annoying noises at you. Where they could possibly have got their inspiration from?

The products were frankly so obviously such a load of old pony, the longer it went on, the more my spirits were sapped. Interestingly, it said a lot about gender politics that the girls knew that their app was rubbish (not that anybody had thought to point this out at the time) but grimly ploughed on regardless, whereas the blokes whooped and high-fived like they’d found the cure for cancer. Having said this, at least the boys had a concept and a plan. The girls just had Susie whinging about anything, Edna bulldozing everything and the Northern One looking like she wanted to murder everyone. 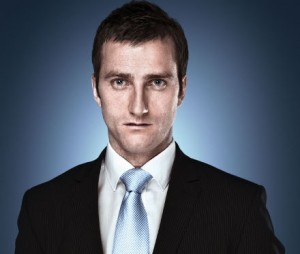 There were pitches to websites that seemed to be given by the depressed for the depressed in meeting rooms seemingly designed for the depressed. Vincent The Musketeer thought he could mount a Charm Offensive, only to discover the websites were focussed on the latter rather than the former and had to be saved by Lucky Jim, who is my tip to win (and will therefore go out next week). There was some conference thing where Edna gave a bewildering presentation which didn’t seem to feature any information about the app at all. It did, however, have an impact in that it caused Blonde Felicity to Actually Say Something, albeit “we’ve lost this”. The boys took a different approach, dressing up in costumes and handing out free doughnuts. Another small part of me died inside.

In the Boardroom, there was a twist worthy of Hitchcock. The boys succeeded at 2 out of 3 of their pitches and the girls only 1. But the girls seemed to land the most important website pitch and also understand what the word “global” meant and as a result of which inexplicably beat the boys by miles. This was after 5 of the 8 girls turned round in the Boardroom and said they hated their own app. The look on Edna’s face at this point was probably last seen at a war crimes tribunal. In contrast, the boys were all really sweet about Leon, all loved their app and were completely, refreshingly united. However, all changed when the results were revealed and they were made to fight for their lives, reverting back to the usual “ferrets scrapping in a sack” mode with alarming speed. Lucky Jim smoothly talked his way out of having written the rubbish pitch and left poor Leon floundering. 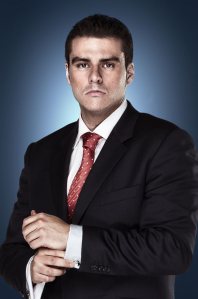 Eventually, Leon dragged back big-eared Glenn the designer and Lazy Alex The Nasty Estate Agent back for a roasting from Lord Shugah. Leon clung on by the skin of his teeth and Lazy Alex got the well-deserved boot. Meanwhile, we were rewarded for having sat through this tosh with a glimpse of the girls eating in a restaurant run by LOVELY MICHEL ROUX JR! Other members of this parish have previously said as much about LMRJ and he was his usual sweetheart self here.

So Today’s Apprentice Lesson – despite the presence of New Technology, it’s a Tale As Old As Time that people will buy any old cr-app if sold to them by a pretty girl wearing a miniskirt and brandishing a lollipop. Sigh.

Filed under The Apprentice