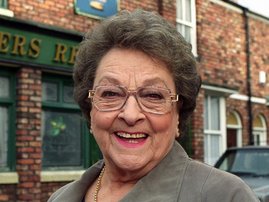 I’ve not watched Corrie for twenty years but even when I did, Betty had already been pulling pints forever. Till I heard her today on Desert Island Discs all I knew about her was that the actress has the same name as her character, she’s a dab hand with a hotpot, and she has a lovely dry sexy laugh at odds with her appearance.

What a revelation Betty Driver was on DID, and what a heartbreaker too. Who knew she had such a hinterland? I cried twice, and was gripped the rest of the time by sparkling tales of Gracie Fields, Henry Hall and Hoagy Carmichael, names that seem to come from a time beyond imagining, but were brought right up to date by this ninety year old, still sharp as a tack. Her miserable childhood (‘We never got a kiss, except one on New Year’s Eve – that was the love for the year’) was clearly still as raw now as almost a century ago. Her bullying mother pushed her onto the stage from an early age, recognising the commercial potential of Betty’s lovely voice. We heard this voice, recorded when she was about eighteen, but Betty said she couldn’t stand to hear it, had only chosen it as one of her discs because her friends (‘my seven gentlemen friends’) insisted on it. You didn’t have to be Sigmund to realise she couldn’t bear listening to her singing voice because of the memories of those awful years. Kirsty sensitively left us to analyse this ourselves, and left us too, to surmise that Betty’s rotten marriage to a cheat and wastrel was clearly a consequence of her complete lack of self-esteem.

There were revelations a-plenty. Betty can’t really make hotpot and is a terrible cook! One night when Coventry was bombed during WW2 she took care of the twelve year old Julie Andrews!  Ella Fitzgerald was a massive Corrie fan! Betty’s friend Winifred Atwell’s husband once punched Betty’s husband and when he told her, she said ‘Good!’

There were mysteries too. Betty claims to have no idea to this day what her mother spent the daughters’ massive earnings on, though she knew it wasn’t drink or gambling. And though  Betty spoke of her love for Henry Hall and how if things had been different she might have had a relationship with him, we never found out what got in the way. I’m guessing they were both married.

And there were plenty of tears. Her description of playing to half-dead soldiers at the end of the war had me bawling into my tea; when she discussed the fan letters she receives from children, I had to pause i-player while I composed myself.

It was a great interview with a fantastic interviewee. I’d like to have heard more about Betty’s beloved sister Freda. We didn’t find out if she was still alive (though a quick wiki reveals she died a couple of years ago). Once the sisters were free of their domineering mother they largely gave up show business and ran a pub together in Derbyshire. Then in 1969 the executive producer of Coronation Street walked in and said, ‘You’re pulling pints here – why not pull them in the Rover’s Return?’ Betty assumed this would be a six-week engagement, but more than forty years later she’s still there. And long may she remain, laughing huskily over the hotpot.

Posted by Qwerty. Listen to this programme here