Glee (22): Time to mothball the tracksuit of power 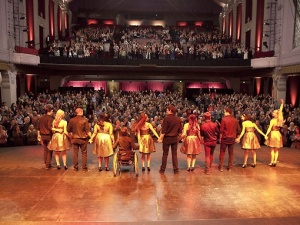 So Glee ends its first season by tying up many of its loose plot lines in nice satiny bows, and whipping the rug out from under my big assumption. Most of the usual tropes were in place for this highly emotional ending: Sue doing her bit to ensure Glee is wiped from the face of McKinley High and Will shouting impotently at Figgins about the injustice (Sue is one of the celebrity judges at Regionals: “I realize my cultural ascendance only serves to illuminate your own banality. But, face it, I’m legend. It’s happened.”); Sue criticising Will’s hair (“Your hair looks like a briar patch. I keep expecting racist, animated Disney characters to pop up and start singing songs about living on the bayou.”); and the Glee club’s journey from desperation to exhilaration.

Along the way we learn that Emma is dating a dentist who asked her out after showing her his sterilisation equipment (and being very impressed by her oral hygiene…), that Journey’s Don’t Stop Believing can reduce Mr Schue to tears and that the best place for Finn and Rachel to have a face to face conversation is on the stairs (Finn at least three steps down from our favourite diva).

Will rallies the troops with the promise of a Journey medley and the slightly dodgy cry of “Who cares what happens when we get there, when the getting there has been so much fun?”

You may have been wondering who was going to join Sue on the panel of celebrity judges – the answer is Josh Groban, Olivia Newton-John and news anchor Rod Rimmington (the man who broke Sue’s heart).

Narrative rules say that New Directions’ heartfelt and actually excellent performance wins over the audience and three of the four judges, and that we go into Season Two with our eyes on the next prize…

If you’ve watched this far, you’ll know that Glee says ‘screw you’ to narrative rules every week. This week is no different: the audience is on its feet for the roof-raising  and frankly glorious performance (Don’t Stop Believing still makes me smile everytime), Sue is unmoved, but the sting in the tail isn’t what you’re expecting.

As Vocal Adrenaline roll out a highly polished version of Bohemian Rhapsody (with a distinctly bitter-looking Jesse St James in the lead), Quinn sees her mother for the first time in months (she’s thrown Quinn’s unpleasant father out for cheating on her with a tattooed freak) and promptly goes into labour. Cue some very neat cutting between the Queen number and Quinn’s screaming in the delivery room (I will go to my grave with cervical dilation interpreted in dance etched on my memory). I believe Quinn speaks for every woman who has ever given birth when she shouts at Puck: “You suck! You suck! You suck!”. (Did you see the baby twist coming? I know I should have  – but the sight of Shelby taking little Beth home was one I hadn’t anticipated.)

Back in the judges’ room, things are weird and the sting is coming closer. The slimy news anchor who ‘partied hard’ with Freddie Mercury back in the ’70s likes Vocal Adrenaline, ONJ is offended that only Aural Intensity chose to honour her in song, while Josh Groban is flirting with Sue and expressing admiration for New Directions. The rant that this produces from ONJ actually provokes Sue into standing up for her school and its kids, and sees the rest of the judges viciously turn on her  – as an inadequate with delusions of grandeur.

Sue even puts New Directions first on her ballot paper, but it’s not enough to save them from last place and heartbreak, as Vocal Adrenaline win. Again. 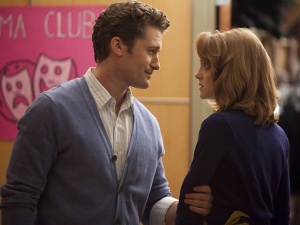 And once again Will is wetter than a trip over Niagara Falls as Figgins fulfils his promise to disband Glee – it’s left to Emma to passionately defend the kids in a futile bid to save the club. I do understand why she lets him kiss her – but honestly, it’s no wonder Terri rang rings round him for so many years.

Equally, it’s easy to see why the kids love Mr Schue. As Rachel explains before they tearfully serenade him with To Sir, With Love: “We don’t care what the judges say: we won. Because we had you as a teacher.” Mr Schue’s blubbing, the kids are blubbing – and yes – I was blubbing too. 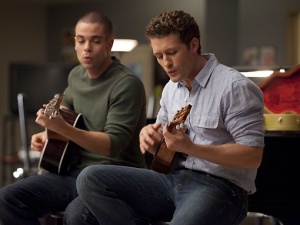 And the tears kept coming as Will and Puck treated us to a gorgeous accoustic guitar-accompanied version of Somewhere Over the Rainbow. The guys were pretty gorgeous too. Sigh.

So, who saved Glee in the end? The only person with the power to save it, of course: Sue. I like to think that it’s not just because she wants to enjoy fighting with Will for another year – that somewhere inside her she was moved to help the kids too. But don’t tell her that – I don’t want her to hurt me…

And with that, I have to put away the tracksuit of power (thanks Qwerty) and await Season 2. It’s going to be a long summer…

Posted by Jo the Hat.

6 responses to “Glee (22): Time to mothball the tracksuit of power”