True Blood 212: I swear I’d wear him like a scrunchie 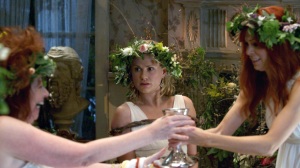 I’m afraid there was a definite ‘is that all?’ feeling this week, but how could there not be, after the frenzied peaks of episodes 9 and 10? Lafayette forced Sookie into a bridesmaid outfit – we knew he was definitely under Maryann’s influence when he told a woman to take off her clothes – and Maryann named her ‘matron of honour’. Sookie somehow allowed herself to be tied to a chair (when did that happen?), which coincidentally is the only way I too have ever allowed myself to be designated a bridesmaid. In fact, the black-eyed black-out thing might explain why I can remember little about any nuptials I have attended.

Once we knew the ‘wedding’ was a-coming, there was a certain inevitability to proceedings. We knew Sam would be delivered as a sacrifice, though admittedly we didn’t know how he’d get out of it; we knew the townsfolk would stand around smiling dopily, going, ‘Wooh, Dionysus’; and we knew Bill would have to save the day. So while I wasn’t exactly yawning, I wasn’t digging my nails into my cheeks with tension either.

More intriguing than the marriage preparation was Queen Sophie-Ann pinning Eric to the floor of her Chigwell manse. What’s the deal between those two? I guess they’ve had plenty of time to build up some history. And why is the Queen getting Eric to get Lafayette (keep up at the back) to sell vampire blood? And why is she still playing Yahtzee after all these centuries? Eric ought to buy her a nice Cluedo set. 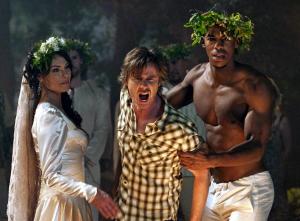 Very soon, two of these people will be dead and the third will have a mucky arm

There was one big surprise left in the Maryann storyline. This was when she walked slowly towards a huge white bull, which she assumed was her beloved god, but which we knew was Sam. It seemed such a gentle scene, with Maryann whispering sweet nothings to the creature. Then the bull suddenly gored her to death, and mid-gore, it turned back into Sam, his arm up to the elbow in, well, gore. He yanked out Maryann’s black heart and squelched it into her face. Yep, that’s an image I’m going to struggle to forget. ‘Was there no god?’ Maryann cried plaintively, and rather restrainedly under the circs, then expired. Sam meanwhile rushed off to find an industrial tub of Swarfega.

All the townspeople had their own take on what had happened, and charmingly, everyone’s version was in keeping with their personalities. Tara, remembering some bits, was edgy and irritable, so no change there. Andy and Jason were convinced they’d saved everyone, so we won’t tell them their rescue party  lasted two seconds before they were turned into black-eyed loons, nor that Andy pranced behind Maryann holding her bridal train like a grotesque overgrown page-boy. Lafayette wisely didn’t want to know what had happened; two redneck ladies in the bar reckoned it must have been contaminated alcohol; and Eggs lost his mind and ended up getting shot, though he would doubtless have committed suicide anyway in a few days. I’m sorry for Tara and all but I’m not going to miss Eggs; he was too easily led if you ask me. And he played the guitar in an annoying way. 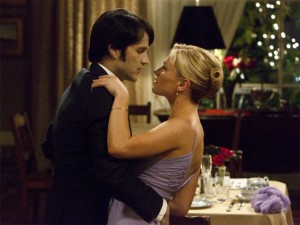 Sookie, I'll wait for you forever. Well, till Season 3 anyway.

In other news, Hoyt tried to patch things up with Jessica but she was busy scoffing a creepy truck-driver. Bud gave Andy back his badge: ‘You’ve got your faults Andy, but at least you’ve got your pants on’ (all it takes, apparently, for a Southern cop to progress through the ranks). Sam traced his adoptive parents who had ditched him just ‘cos he was a bit of a dog. And Bill took courting lessons from Reggie Kray, sending Sookie a dress and hiring an entire French restaurant in which to propose to her.  Sookie went to the ladies room to powder her nose and think through whether she wanted to marry a control freak dead chappie, and I realised it was not going to end with confetti and something borrowed, and began to shove my nails back into my cheek.

‘I will marry you, Bill Compton’, Sookie cried as she ran back into the dining room, only to find the wine-glasses upturned and Bill captured by forces unseen, though surely it’s got to be Eric.

‘Bill?’ cried Sookie plaintively. ‘Bill?’ It wasn’t clear whether she was calling for her man, or anxiously requesting the tab for the expensive evening which had ended so cliff-hangerishly.

7 responses to “True Blood 212: I swear I’d wear him like a scrunchie”