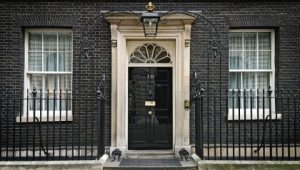 And the winner is …. TV.  After months in advance of being told “it’s social media, stupid”, this election has made us realise that TV rules.

The only place they couldn’t yet get to was inside the Palace.  The badly taken snap of Cameron with her Madge – probably taken by Phil on his phone while making bad taste jokes about SamCam – was the last redoubt, shown rather embarassedly amongst the literally more moving footage.  Next time, next time we’ll have the Buck House CCTV and a Royal camera crew with live feeds to play into the 24 hour news.

This election – from the leaders debates to the common-sense defying but spot on exit polls, from the aerial shots of Whitehall to the No 10 door-step in and out – has been TV’s by a mile.

But interestingly, there is no coalition for these guys.  BBC, ITV and Sky still pretend the others don’t exist.  They’ll happily review all the papers and show off their Twitter feeds to demonstrate just how chébran they are.  But as they stand outside No 10 or on College Green they all seek to keep up the pretence that they’re the only TV crew there.

No 10 – or in Nick Robinson’s hypervent state “the most famous address in the world” (which I think the US president, the Pope and even the Queen might have grounds to query) – does provide the best backdrop for the chosen few political editors.  Hoi polloi have to goggle through the iron gates several hundred yards away.

No 10 is instantly recognisable and flatly iconic like a Warhol picture of a door.  It lends gravitas and honour to the chosen few allowed to stand in front.  It has sufficient comings and goings to make it interesting and yet not so many that it’s just another thoroughfare.  And they can be sure that no idiot will appear behind them and start doing silly walks.

The contrast was shown as round the corner in Whitehall, where the real coalition negotiations were taking place, the rag-tag mobs of the interested, the nutters, the rent-a-mob crowds calling for Troops Out and Fair Votes Now (what, you really want another election now?) were able to gather outside the unprotected Cabinet Office entrance.  As the party negotiators made their way to and from the discussions, they had to battle their way through crowds.  The next tier down of reporters trying to get across the nuances of who was asking for what from whom had to fight to make their voices heard – and they had mics.

It suggests to me that without their party spin doctors, the workaday Whitehall PR men either a) simply hadn’t thought through the reality of what was about to happen; or b) wanted to demonstrate just how unspun they were.  Well they succeeded – it looked crap.

Even the dull local council which gets only 5 seconds of TV fame on election night as the returning officer intones has a nicely presented backdrop saying that “Bexley is the Brighter Borough” or whatever.  Work it up for next time:  “The Cabinet Office: making Government work for you”.  (Or how about “We’ve been keeping the minutes for over 100 years”.  You get the idea.)

The other TV trump card is the helicopter shot. You can’t do it on radio. Papers only really do close-ups.  But TV gloms onto an otherwise anonymous car weaving through traffic – and we sit transfixed because “the new Prime Minister is in THAT car”.  We followed DCam’s Jaguar stuck in traffic on the way to and back from the Palace.  I could imagine US protection detail watching dumbfounded as cyclists, Hondas and pedestrians casually passed around what is now the most high profile terrorist target in the UK.

But as quickly as TV has gathered, so will it pass.  Once the Cabinet positions have been doled out to the now requisite 6 Liberals (which is remarkable – from being derided by even the lowliest Tory backbencher a few weeks ago, every Lib Dem MP now stands a better than 1 in 10 chance of being a Cabinet minister), mainsteam TV will pack up and its attention will return to the inanity of celeb culture and 24 hour TV news returns to being the dull channel.

David Steel and Paddy Ashdown will be locked away in their special cupboard (where Charlie Kennedy has been kept handcuffed throughout) for the next time Cleggmania (or Clegg himself) explodes.  And David Dimbleby will be tucked up in a big bed and allowed to sleep for as long as he wishes.

18 responses to “BBC News Election Special: “Coalition of the winners””