Raaah… we’re back firing on all four cylinders this week. There was nothing average about last night’s episode – from Alex’s dream about the lovely Sam Tyler, to the improved quality of Gene’s one-liners (“Not going to shoot him Bols? Then let’s go and run him over…”), the look of terror on Ray’s face, Chris body-popping – when they’re good, they’re very, very good.

Life on Mars fans will remember DCI “Bastard” Litton (and Press Gang fans will remember Lee Ross). It’s a delight to watch the tension between Litton and Hunt (Alison Graham describes it beautifully as ‘like watching two polyester-clad stags’ and I just can’t do any better.) as the former turns up on the trail of Manchester comedian Frank Hardwick, accused of stealing two grand from the Police Widows’ Fund.

You can almost smell the testosterone and cheap aftershave coming off the TV screen  – despite Litton’s nasty grey ‘Next for men loafers’.

Kudos to the writers too, for demonstrating just how fine the line between Gene’s outrageous one-liners and Litton’s downright offensiveness is. How they have kept Gene from teetering over that line in all this time is frankly miraculous. I also liked the little line about troglodytes they gave to Shaz – “It means big, strong men from the north.”

More worrying is Keats’ offer to transfer Alex to Fenchurch East and Gene’s refusal to talk about what happened to Sam. I still have faith in the Gene Genie (I even have a theory for what’s going on now), but I worry that Alex will be lost by the end of episode eight if she doesn’t take the leap of faith that Gene describes to her.

Actually, I’m worried about them all now – the look of terror on Ray’s face at seeing the edge of the world reminded me of a great novel about near death experiences (Passage by Connie Willis – possibly the most frightening book I’ve ever read – highly recommended). And here’s my theory – they’re all dead already (or as near to dead as makes no difference in the case of Sam and Alex); Gene is the guardian angel of this world; and perhaps he despatched Sam because Sam was threatening the stability of the world. That they’re seeing stars could mean the world is coming apart again. Whatever the truth of this world is, I’m damn sure that is what Gene whispered in the ear of the bad man at the end of the episode.

Speaking of which, it turns out that Litton’s righthand man DI Bevan is trying to kill Hardwick because he witnessed Bevan kicking a black teenager to death. 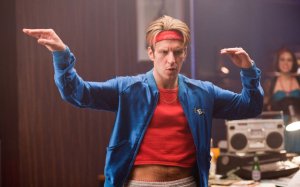 say I don’t know why they had to use the Policeman’s Ball (as opposed to the Secret Policeman’s Ball) to lure Bevan out, but I do. It is so we can enjoy the sight of Chris bodypopping in cut-off vest top and shorts – or Oliver Newton Skelton, as Gene renames him. Not to mention the touching scene where Shaz and Ray singing Danny Boy (all that talk of dying… is giving me the SHIVERS. Sorry – rereading A Prayer For Owen Meany at the moment – my favourite book ever.)

Of course, just when everything seems about to turn out okay – Keats turns up to discipline Litton and show that actually he really does have power over them. Worse still is Alex losing her faith in Gene? He may be the only thing keeping her alive (he’s much more than a benign tumour, we know that already) and next week clearly has the potential for things to go badly wrong for someone. See you then?

Posted by Jo the Hat.

Filed under Ashes to Ashes