I felt rather forced into watching the election debate last night by my other half, who accused me of not paying enough attention to the biggest decision this country has faced in a long time. Actually, I know all about making decisions. I am in the middle of making one right now. It’s getting warmer and it’s time to decide… will it be Gladiator sandals, flip flops 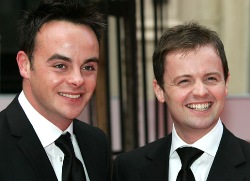 or ballet pumps this summer? Anyway, I decided to show him I could take an interest in the Live Debate and besides, I love anything with Ant and Dec hosting.

After I had recovered from the initial disappointment that Ant and Dec weren’t  hosting and that the audience weren’t allowed to boo anything they didn’t like, I started to listen to what these three men were saying. My husband asked if I even knew the names of the party leaders, which of course I do.  David Cameron reminds me of my slimy Geography teacher; Nick Clegg looks like the dishy bloke who sold me my Renault Clio… crook… (car man not Nick Clegg); Gordon Brown looks like Crazy Bob from the pub who sings karaoke in his slippers. So now I have proved I know who they are, I feel I can comment on their policies and give my opinion on them.

To show I take an interest, I had a read of the campaign posters in the city on my way to Primark (jeggings £3). I must say though, I don’t think those with a picture of Gordon Brown’s face and the words “I took millions of pounds from pensioners last year, let me do it again” is a very good slogan for someone wanting to be Prime Minister again. Then after seeing the news from Rochdale on Wednesday, I realised he really does have it in for pensioners doesn’t he?

Last week there were discussions about Foreign Policies. Well I think we should deal with our own policies before we start bothering about theirs. So what did tonight’s debate have in store?

Tax Credits were mentioned, but no one seemed to admit if they were going to cut them, keep them or abolish them. I think the question that should be asked about tax credits is how do you fill in the huge and very complicated form correctly, so that in a month’s time they don’t ask for the money back, because (like me) you filled it in wrong and told them you had 13 children?

Also they are all planning to raise the cost of taxes which is really unfair, it already costs me £6.50 to get home on a Friday night. All three of them agreed (finally) on stopping bankers getting huge bonuses, although Nick Clegg suggested giving them Golf Memberships instead (what if they don’t like golf? Plus I imagine it will really naff off the wives when they hear  “No more luxury cruises love, but check out the diamond patterned jumper!”).

One lady was saying that although she and her husband both had good jobs, they still couldn’t afford to buy their own house, and what did the parties propose to do about this?  Nick Clegg pointed out to her that there were thousands of empty, boarded up houses all over the UK, but she really didn’t look like the squatting type to me.

It’s also time to change the way we vote. Phone voting is much better and it works for The X factor, Britain’s Got Talent and Big Brother, so why not for the election? The best thing about a phone vote, as well as not having to get off the settee, is that you can vote as many times as you want for your favourite.

So I will be voting on May 6th. Off to my local scout hut  to put my cross against the chosen one, and even I know it will take more than a nice suit and a cheesy smile to influence my decision.  As for the footwear? Well that’s still undecided…